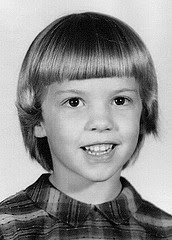 First grade was where Deb Raney learned to read, and "Tip and Mitten" stands out in her mind as the book that launched, well, quite a few books! As a farm girl in Kansas, she got inspiration from Laura Ingalls Wilder's Little House on the Prairie series and at 12 decided to try this writing thing for herself. At that point all history seemed to be the same, and she had accidently put an airplane in a story set in the 1700s. It was then that Deb vowed never to write historical fiction again. Thank goodness for us she broke that vow.

[Crystal Editor's note: Do you suppose she missed her calling as a fantasy/sci fi author? Naah. She writes contemporary women's fiction very well!]

Let's take a look at Deb's past and see how that influences the writer that she is today:


Childhood Ambition: I read Laura Ingalls Wilder’s Little House books when I was 11 or 12 and from that point on, I dreamed of someday writing a book. But my love for kids kicked in before my writing took off and I also dreamed of raising 12 children. The Lord blessed us with four (which most days seemed like 12) and I’d be hard-pressed to say which “career” I’ve enjoyed the most. 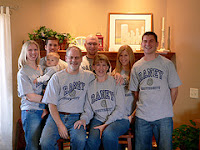 Fondest Memory (then): My grandparents were all very special to me and lived nearby for many of my growing up years. I have lots of happy memories involving them. Also, I grew up on a farm and that is a rich resource for great memories, too. The first one that comes to mind is having my Dad storm into the house one day acting like me and my younger siblings were in BIG trouble. In a crabby voice that held the hint of a smile, he demanded, “You kids get out here with a box right now and...take care of the new baby kittens I just found.” We were thrilled! Baby kittens were a highlight of many summers! (I’m sure that memory is close to the surface because our sweet kitty, Biscuit, who wandered onto our property several months ago and never left, just gave birth to four adorable kittens! My sixteen-year-old daughter and I are already sad for the day we’ll have to find them new homes.)

Biscuit and babies (Want a kitten??)


Proudest Moment ( then): I was a terrible klutz—not an athletic bone in my body! But one spring at the country school I attended, I was the hero of the co-ed baseball game. They had me out in right field where I could do the least damage, but a pop fly came staight at me. I put my glove over my head (mostly for protection) and the ball plopped right smack into it to win the game! I was carried away on the shoulders of the older boys, smiling so hard it’s a wonder I didn’t turn inside out. : )


Biggest Challenge as a child or teen:My biggest challenge was asthma. Wheat and hay seemed to be the triggers for my asthma attacks—NOT good things to have to avoid when you’re a little Kansas farm girl! But as I look back on all the things I missed out on because I was stuck in the house trying to breathe, I realize that my mom was always there—reading to me. I think it’s fair to say that I probably wouldn’t have discovered this wonderful career were it not for having asthma, and a mom who shared her love of reading with me.

My First Job:De-tasseling corn! Oh, did I ever hate it! Hot, windy, sweaty, bugs everywhere, scratchy corn leaves. I’m breaking out in hives just thinking about it! But I worked with a fun group of girls, and we each made $100 for a few days of work.


Childhood indulgence:Dairy Queen! One of our favorite things was when Daddy would come in from the field and tell us all to load up in the car because we were going for a drive. We all knew—even though he’d drive for miles in the wrong direction first, just to keep us guessing––that we’d wind up at the local Dairy Queen. We had a 10-cent limit, which would buy a nice-sized cone. Once in a while he’d let us spend 15-cents each and get a malt or a chocolate dipped cone. It was such a secure feeling being locked in the station wagon with my whole family.


Favorite Outfit as a child:Oh, man! Talk about memory lane! I saved my allowance for weeks for a pair of white go-go boots. I wore them with a blue double-knit mini-skirted shift and boy did I think I was hot stuff. LOL!

Favorite Childhood Movie:We didn’t go to the movies very often, and at home we only watched TV on occasional winter Sunday nights. I remember Ed Sullivan and Bonanza in particular. And the smell of fresh-popped popcorn my mom always made for us on those special TV nights.

Favorite Childhood Book:Well, it’s not politically correct to say so now, but my great grandmother used to sit us on her lap and read Little Black Sambo to us over and over again. I’m certain she had NO idea that this fanciful, delightful tale would one day be judged to have racial overtones. We just loved the story of a little boy and his family and some scary tigers who turned into butter for the 169 pancakes Sambo would eat at the end of the book.

Childhood hero:I think my parents have always been my heroes. My mother made being a wife and mom look like the most joyful job in the universe and my dad has always been a man of integrity—someone I could always trust and look up to. They are still my heroes. 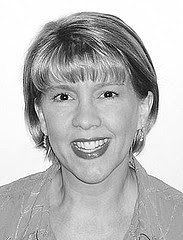 From Deb's biography:
After spending two happy decades as an at-home mom to two sons and two daughters, Deborah finally began work on her first novel––a contemporary story––after an intriguing discussion about Alzheimer's disease with her husband, Ken, and their young teenagers. Drawing on her experiences working in a New York nursing home early in her marriage, she crafted a fictional account of one family's struggle with Alzheimer's disease. A VOW TO CHERISH was published by Bethany House Publishers in 1996 and won an Angel Award from Excellence in Media. It has been translated into the Swedish, Danish and Norwegian languages, and is also available in a hardcover large-print edition from Thorndike Press. Steeple Hill Books recently released an update and expanded version of the book.

Here is a list of fiction books Deb has written:

Featured in:
LET GOD SURPRISE YOU by Heather Whitestone McCallum (Zondervan 2003)
BEHIND THE STORIES by Diane Eble (Bethany House 2002)

Also, she blogs regularly with about two dozen other multi-published authors on The Charis Connection as well as at her own blogspot.
She is now at work on her seventeenth novel. Her books have won the RITA Award, the HOLT Medallion, the National Readers' Choice Award and the Silver Angel from Excellence in Media. Deborah's first novel, A VOW TO CHERISH, inspired the World Wide Pictures film of the same title.

A Vow to Cherish will be released again as a new Steeple Hill version in mass market in October, with a sequel to follow in November, also in mass market. Upcoming books include aforementioned sequel, Within This Circle, Steeple Hill, November 2007 (mass market) and a novella, “Finally Home” in the anthology, Missouri Memories, from Barbour to release in December 2007. The next Clayburn novel, Leaving November, (Howard) will come out early in 2008.

In Deb's own words:

My married daughter ––the one who made me a “Mimi” a year ago!––writes a monthly column with me for Crosswalk.com., a great Web magazine devoted to faith, family and community. My husband and I share an August anniversary with Tobi and her husband, Ryan Layton. Each month, Marriage Perspectives explores various aspects of marriage as viewed from the perspectives of a young married woman (Tobi) and an old...er, I mean long married woman (me). We've had such fun writing together, though I'm not sure our husbands are quite so thrilled, since they are featured prominently every month. : )
[Crystal Editor's note: I will be featuring Deb's daughter, Tobi, in this same column, so look for that soon! One of those article titles is Should In-laws be outlawed? ] 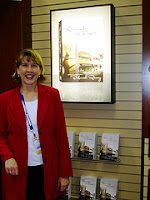 [Crystal editor's note: I just reviewed this book for Church Libraries magazine (not yet published.) All I can say at this point is that I give it "two thumbs up!" And I've gotten a little picky after over 500 published book reviews here and there.

Deb also serves on the advisory board of American Christian Fiction Writers. 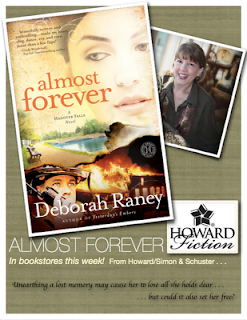 Unearthing a lost memory may cause her to lose everything she holds dear. but could it also set her free?

Volunteer Bryn Hennesey was there at the Grove Street Homeless Shelter the night five heroic firefighters died at the scene. Among them was her husband, Adam.

Now a terrifying absence of memory has her wondering if she might, in some way, be responsible. Garrett Edmonds' wife, Molly, was the only female firefighter to perish in the blaze. He was supposed to protect the woman he loved.now she's the one who's died a hero. How can he go on in the face of such unbearable loss? And what started the fire that destroyed the dreams and futures of so many? Investigators are stumped. But someone knows the answer...

Deborah Raney books always captivate me! Almost Forever is a beautifully written and enthralling read. It made my heart sing, dance, cry, and turn more than a few flips!
~CindyWoodsmall, New York Times best-selling author
As a fan of the very talented Deborah Raney, I expected a great read and I got it in the richly emotional Almost Forever, a story of faith, forgiveness and redemption.  It began with a gripping scene and proceeded to hold me enthralled to the end.  Don't miss this one!
~Karen Young, author of Missing Max and Blood Bayou
DEBORAH RANEY is at work on her 20th novel. Her books have won the RITA Award, HOLT Medallion, National Readers' Choice Award, Silver Angel, and have twice been Christy Award finalists. Her first novel, A Vow to Cherish, inspired the World Wide Pictures film of the same title. Almost Forever, first in her new Hanover Falls Novels series, will release in May from Howard/Simon & Schuster. Deb and her husband, Ken Raney, enjoy small-town life in Kansas. They are new empty nesters with four grown children and two precious grandsons, all of whom live much too far away.
Visit Deb on the web at www.deborahraney.com
Order her books here: http://snipurl.com/raneybooks

I love Deb Raney and her books. She's a first class, truly nice person who happens to write novels I love to read.
Posted by Crystal Laine at 9:39 PM