Debbie Fuller Thomas: When She Was Just a Kid

(Lori was the winner of Tuesday Night at the Blue Moon.) 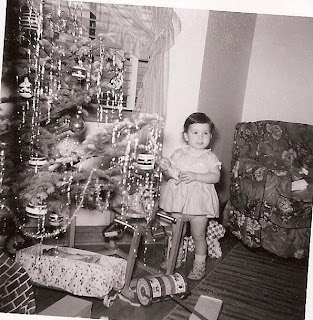 Debbie was two in this Christmas photo. She has some of the old ornaments from this tree, and so she recently started collecting more from antique stores. She now decorates a small Christmas tree in her kitchen every year with only vintage (or replica) decorations and the ones from her childhood. Isn't it beautiful? She was the youngest child of her parents--in fact, she came quite a long time after her sisters. Her sisters were married when she was still young, so it was like being an only child.

Debbie began writing in her thirties during stolen moments at her home day care while caring for six children (hers included) under the age of six. She completed her first novel while juggling her day job and her many responsibilities as pastor’s wife and mother. She sold the first article she ever sent to a publisher, which was purchased for future publication and never printed. It wasn’t until she wrote about her experience with breast cancer many years later that she saw her byline in a magazine.

Since then she has written for Sacramento Sierra Parent Magazine and Chicken Soup for the Bride’s Soul. On June 1st her first book, Tuesday Night at the Blue Moon came out!

Childhood Ambition: To be a ballerina. I was hooked the first time I saw “The Nutcracker” in black and white on our TV. After that, I checked out biographies about famous ballerinas at the library, soaked up their passion and angst, and signed up for ballet class. Unfortunately, I was built more like a pear than a string bean and only lasted for two lessons. I still know the positions, but my feet won’t bend that way anymore.

Fondest Memory (then): Every summer my oldest sister would bring her family to visit and we would spend the day at The Enchanted Forest in Ellicott City, Maryland. It was as close to Disneyland as we could get. The Enchanted Forest was a wonderland of fairytale characters, houses, scenes and rides. We took a picnic lunch, stayed until the youngest got cranky, and shopped for souvenirs on the way out. I still have a small plate with a picture of the castle and a pennant with Humpty Dumpty. Sadly, the Enchanted Forest closed years ago. My sister emailed me recently with a link to Clarklandfarm.com, which has purchased many of the figures such as Cinderella’s pumpkin coach and Mother Goose to display in the petting zoo. Even though it’s on the other side of the continent, I’d love to visit the farm together soon. 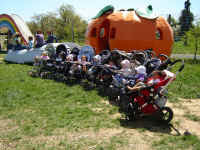 Proudest moment (then): In elementary school, I was chosen to sing one of the verses of “The Friendly Beasts” at our Christmas program which was held on the stage of the high school. But that night when the teacher played the intro, I looked out into the blackness of the crowd with the stage lights in my eyes and froze. The teacher started the song again and said quietly but firmly, “Start over.” That time I got my act together and sang, “I said the sheep with curly horn…”

Childhood Indulgence: I always had a horrible sweet tooth and lots of cavities to prove it. That was before anyone realized that fluoride was an important ingredient for toothpaste. Each holiday or special event had its own temptation: Peeps at Easter, candy corn at Halloween, cotton candy at the carnival, Stuckey’s pecan rolls on vacations to Georgia, Rolos at the movie theater, ribbon candy at Christmas. Needless to say, I always carried a little extra weight around my middle. But I look back now and realize I was skinny then, and I didn’t even realize it. 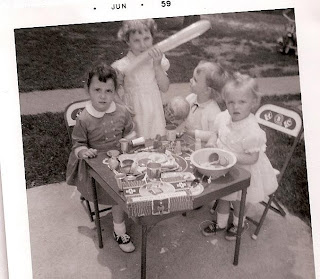 This was my fourth birthday party. I’m the dark-haired one. All the kids went home with an unexpected surprise –exposure to measles. That was before the MMR vaccine. After they went home, mom realized I had a fever and the next day I broke out. I guess I don’t look too happy in the picture, at that.


School Memory: One afternoon in third grade we noticed that our teacher had her head down on her desk crying. We were at a loss about what to do, but just then my mother came to pick me up for one of my many dental appointments. We told her that Mrs. Webber was crying, and she went over to check on her. Mrs. Webber said that she had just heard that President Kennedy had been shot, and that she had been his teacher.

Biggest Challenge as a Child or Teen: I was a ‘late’ baby, so my sisters got married when I was young and I sometimes felt a little like an only child in high school. I learned to be pretty self-sufficient, so I didn’t make friends easily, and I sure didn’t know how to talk to boys.

My First Job: My first job was selling concessions and admission to the swimming pool in Ellicott City when I was sixteen. It was fun, but things could get dicey pretty fast, because most of the patrons were rough-and-tumble types. I remember when this big guy told me he was not going to pay the admission and I stared him down (trying not to tremble) and said that, yes, he was paying. He was just toying with me, but I think I surprised him, because he laughed and tossed his money onto the counter.


Favorite Outfit as a Child: I would have to say my Girl Scout uniform. I was in Girl Scouts for five years, was a patrol leader and earned lots of badges. Back then, the uniform was a dress, and we wore them in class pictures. I still have the sash and hat.

Favorite Childhood Movie and/or TV Show: My favorite movie was “Sleeping Beauty,” with “Parent Trap” as a close second. My favorite TV show was “Astro Boy.” I wanted to marry him. But then I also fell in love with Clint Walker (‘Cheyenne’), Mickey Dolenz (Monkees), and Bobby Sherman (Here Come the Brides).

Favorite Childhood Book: The Witch of Blackbird Pond and Calico Captive by Elizabeth George Speare. I wish I could write like that.

Favorite Childhood Activity/Pastime: I spent a lot of time with neighborhood kids building forts and tree houses, and hacking trails through the brush. As I recall, we spent most of the time building and then had to go in because it got dark, so we never really played in them. In summer, we occasionally went swimming at Pasadena Beach on the Chesapeake Bay. I remember lots of jelly fish. And catching lightning bugs. Unfortunately, we don’t have them in California.

My Hero: My dad – he reminded me a little of John Wayne. 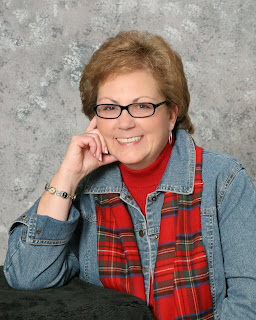 Debbie Thomas Fuller's first novel, Tuesday Night at the Blue Moon, debuted June 1st. It is the story of a grieving mom who discovers the child she lost to terminal illness was switched at birth, and of her biological daughter who wants no part of her family. 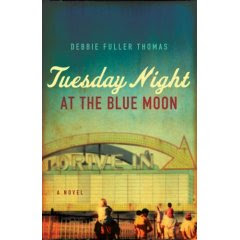 If you would like to win this book,Tuesday Night at the Blue Moon, then just leave a comment with contact email (put it in this form: yourname AT ISP Dot com) answering this question: What famous person, besides Debbie, had Mrs. Webber for a teacher?

If you want to check in on Debbie's thoughts, events and Top Tens, go to her blog here. (To check her Top Ten Classic Movies, which turns out to be her Top Sixteen, go here!)
Posted by Crystal Laine at 7:26 PM

What a fun interview, really reveals who Debbie is. Thanks for sharing!

JFK! I could just picture it. That is such a poignant memory!

Looks like a great book, and I LOVE the cover art. I'd read it for that alone. :)

What fun childhood memories! The interview brought back some fun memories of my own childhood.

Her debut book sounds like quite a tearjerker. I would love to read it. Please enter me.

Would love to win a copy of this book. It sounds great.

The answer to the question is, John Fitzgerald Kennedy.

I would love to win a copy of this book, as it sounds very interesting.

The answer to the question is, John Fitzgerald Kennedy.

Have heard great things about this book. Please enter me in the contest.

What a neat interview that was.

I would love to be entered in the drawing and win a copy of the book.

Please enter me in the contest for Debbie's new release. I ALSO spent many childhood hours at Enchanted Forest. LOL. Dawn dmthomason13@hotmail.com

I forgot to mention that OTHER famous student - John F. Kennedy.

Hello! Please enter my name in the drawing! Thanks and God Bless!
Kyndra
smile_y9 [at] yahoo [dot]com

You did a great job of that interview, I love finding out about people and their childhoods.

The answer is John Fitzgerald Kennedy so could you please enter me in the draw?

JFK, that is so neat :)
this sounds like a great read!

I really enjoyed getting to know Debbie better through this interview. I've been wanting to read her book from the time I read the first review.

The answer to your question is President Kennedy, and what a memory to treasure!

Whoa! I have had so many storms and loss of electricity (I live in Indiana) that I haven't been able to get online and do this!

I'm drawing this today (June 13th) and will email one of you today! (A storm is brewing up again, so don't hold your breath.) But I will draw and someone gets Debbie's new book.

Sorry to have kept everyone waiting!

Well, bummer. I was hoping to enter the contest, too. I came over after reading your comment to Rachelle Gardner's post about reading. And how delighted I was to see the interview with Debbie. She and I were in the same mentoring clinic at Mount Hermon ... back in 2004, I think. Of course I would love a copy of her book, and just on the outside chance I can sneak into your drawing, the other famous person Mrs. Webber taught was President Kennedy.

Hi Crystal!
I got your email about the drawing yesterday (the 14th). My phone and internet have been out for two days as well, so I hope I'm not responding too late. I did send an email back with my address, but as our computer has been rebelling lately, I wasn't sure if you'd received it. If you need me to send it again, let me know! Thanks for having this contest!!
Lori